I've been a big fan of my guest blogger for a number of years now. And Edie has become a fan of his due to his brilliant tea blend, "Persian Princess." I enjoy his wit, his humor, and his generosity of spirit when it comes to encouraging, suggesting, maybe even admonishing (in fun) many in this circle of tea lovers. When he mentioned he may an idea for a "Tea Moment" I could not have been more thrilled. And so, it is with great pleasure that I introduce Robert Godden, a.k.a. The Devotea as my very special guest blogger today:

The great thing about being a tea blender is that other people will share with us their moments; the ones that contain our tea.


But each of us also has our own tea moments.
Our tea company, The Devotea, has 21 blends, and you’ve probably never heard of them. Apart from our Special Earl Grey, they all have names that reflect what we want from the tea or how we see it. And names like Lord Petersham, Finbarr’s Revenge and Two Tigers don’t tend to pop up elsewhere.


When a new tea comes on line, it starts as a thought. And those thoughts come flying at us many times a week – only a small number make it through.
Sometimes we get a request. Sometimes we need something to suit an event. Sometimes people who visit our tasting benches and market stalls give us gratuitous advice at great length. Sometimes my wife and business partner Anne will make a highly strategic suggestion as in “We need a white tea with cranberry in it, because people will love it” or “Why not blend these two things that are great for digestion with a gentle green tea for people with dodgy digestive systems”. Both of those suggestions led directly to popular teas.


And sometimes the two of us just evolve an idea.
Sometimes it will start with a fascination: we read a lot of history and have an interest in architecture, so one day just decided to create a tea that was reflective of the Art Deco period (circa 1930), thus Seaside Rendezvous was born. After a fair bit of research, of course.


One of our teas is special to me because it just popped into my head, fully formed. I just knew that if I blended certain teas and herbs and spices, in certain proportions, it would work.
I was in the shower when it did so. Racing out barely dried, I feverishly mixed the first ever batch of Kali Chai; a masala chai for people who don’t take milk. 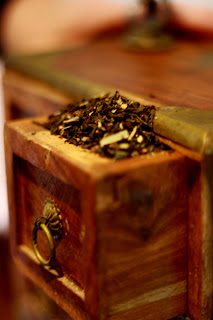 It has never varied from that moment. It’s like it was implanted, fully formed, in my skull by tea- loving aliens.

It’s not our biggest seller, it’s only available from our Australian store and it’s dwarfed in terms of sales by its parner-in-chai Aussie Ginger Chai.


And yet, it’s special because I can remember the exact moment it sprung into being.

The Devotea is an Australian tea blender, video maker and writer, whose upcoming first visit to the USA is making many people quite nervous. His new book "The Infusiast: Diatribes by The Devotea " will be launched in Las Vegas on June 6th 2013. He is sometimes referred to as Robert Godden by people who don't know any better. 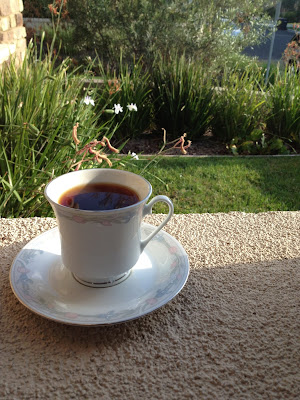